These are all pumpkin recipes you have shared with us in exchange for your free heirloom pumpkin :)

Pumpkin-Chestnut Soup - Celia P. (recipe is in french, see below for English translation)

Pumpkin Apple Soup
Cooking Light - http://www.cookinglight.com/recipes/pumpkin-apple-soup
Recipe provided by Steph F. She has been waiting for a pumpkin to try this recipe on.
Serves 8 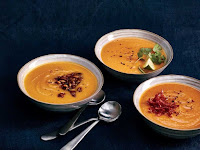 Pumpkin Mushroom Soup
A long-time family favorite from Dawn P. She'll be serving it on Christmas Day with her "outlaws."

Pumpkin Soup
The Pioneer Woman - http://thepioneerwoman.com/cooking/pumpkin-soup/
Recipe supplied by Bill D. He says the soup is best the next day.
Serves 8

Pumpkin Chestnut Soup
marmiton - http://www.marmiton.org/recettes/recette_soupe-potiron-marrons_36439.aspx
Recipe submitted by Celia P. Celia says marmiton is one of the best french recipe sites and this soup is an absolute favorite of hers. 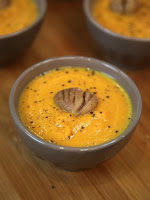 Serves 4. Any mistakes are due to my poor translation skills.


Braised Chicken with Pumpkin & Butternut Squash
Recipe supplied and modified from epicurious - http://www.epicurious.com/recipes/ food/views/ winter-squash-and-chicken-stew-with-indian-spices-876 - by Melissa D. She likes it with pumpkin and a bit more spices than the original recipe.

Posted by Highland Orchards at 11:13 AM